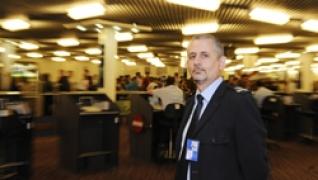 UK BORDER FORCE returns to Sky1 HD revealing new challenges faced by the staff on the front line of immigration control and providing viewers with a fascinating insight into a typically unseen world. The second series of UK BORDER FORCE comprises ten one hour episodes and will start on Sky1 HD and Sky 1 on Monday 7th September at 9pm.

As well as revisiting personnel at Heathrow Terminal 3 and Calais, series two of UK BORDER FORCE will introduce viewers to new faces in the UK Border Agency’s teams across the country in offices such as Portsmouth and Glasgow, as well as abroad. The cameras also travel to Lagos to show how undercover officers must stop Nigerians trying to board flights to the UK on fake passports, risking their lives on a daily basis.

In addition UK BORDER FORCE series two reveals the fascinating journey taken by immigration officers to uncover the biggest visa scam in British history. The UKBA investigation into Univisas unearthed more than 90,000 counterfeit documents which had allowed hundreds of people to cheat UK border controls. The following court-case resulted in the convictions of three illegal immigrants who were jailed in June this year for a combined total of 19 years. Exclusive footage includes the moments officers found hidden documents, stamps and bundles of cash at a house in west London, and the steps then taken to secure conviction.

Away from immigration, Deep Rummage teams are seen searching tankers for drug hauls, and customs teams must confront passengers attempting to enter the UK with illegal goods, contraband and products of animal origin.

UK BORDER FORCE series 2 is produced by Steadfast Television for Sky1 HD and Sky1. The series was executive produced by Emma Read for Sky and by Paul Crompton for Steadfast. Ben Rumney is series producer and Diccon Green, Steven Fullagar and Martin Webb are producer-directors.

You can read the full press release here.
Add to: